Tradition roast suckling pig in SEGOVIA. The roast suckling pig is part of the Castilian cuisine since the invasion of the Roman Empire to the lands of Hispania. It is one of the great legacies that left us the Roman invasion of the Iberian Peninsula, along with the wine. During this time, the roast suckling pig was a delicacy only within reach of the privileged class. Due to the expansion of this dish by the Roman Empire, the roast suckling pig is a very popular dish in many regions of the old Empire mainly, but also in many eastern regions due to its popularity in the ancient Chinese Empire… being the Way of elaborating it and serving it the main difference. With the passage of time, the tradition was lost a little because of the economic situation, and the animals were allowed to fatten as it supposed a greater obtaining of food. Later, during the 17th century, the roast suckling pig became popular in the taverns and banks of the Castilian zone, which offered this dish to the travellers who were heading to the court. In the twentieth century, the piglet took momentum as a claim in the tourist sector, disputing between different cities and regions the best recipe to attract tourists. In this “dispute”, the Piglet Segoviano reached international fame, mainly due to two fundamental factors: its simple elaboration and its way of cutting it before being served. On its elaboration, while in other regions there is tendency to macerate, marinate and season with different spices, in the piglet Segoviano prima The simplicity, using only water and salt, enhancing its natural flavor and prioritizing the raw material. Finally, to show his tenderness, the piglet Segoviano is parted with the song of a dish that later breaks in front of the diner. 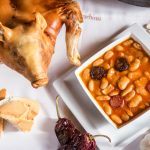 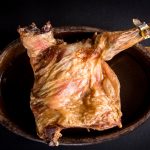 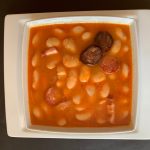 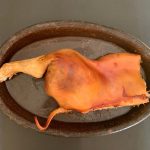